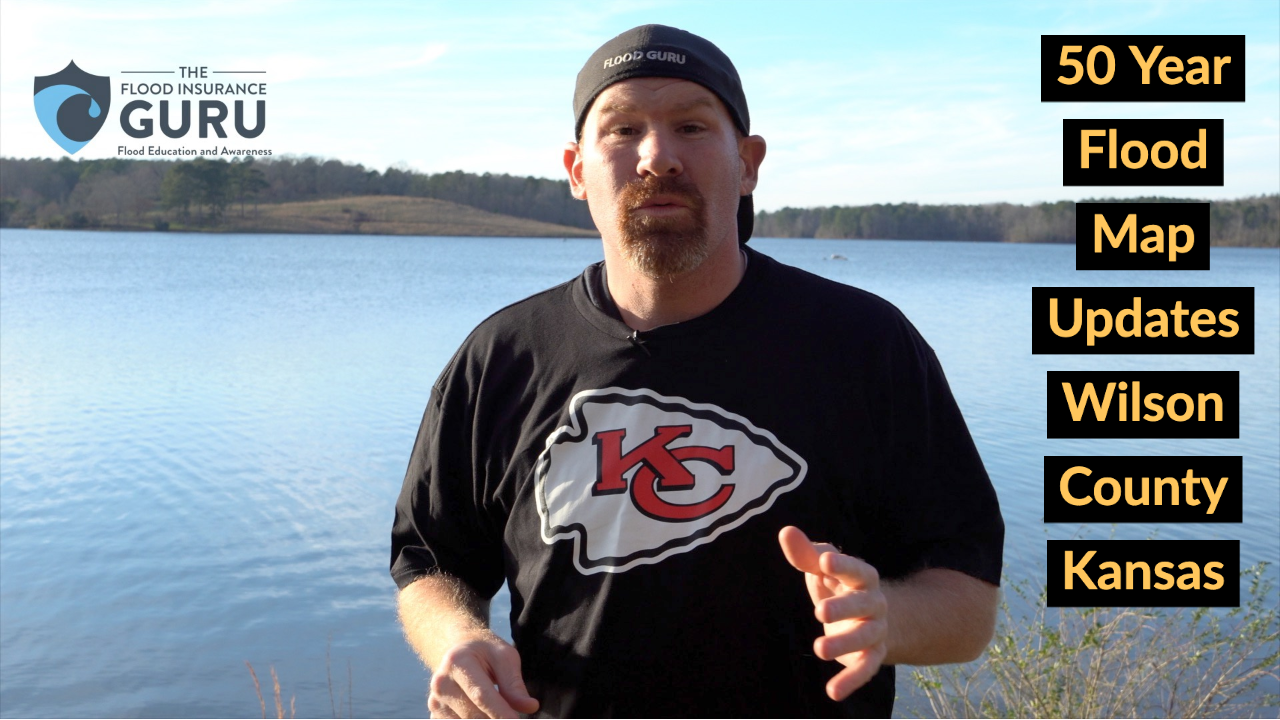 Things can really change over 50 years just ask the Kansas City Chiefs that was the last time they had won the super bowl until February 2020. The same thing goes for Wilson county Kansas who on January 8th 2020 got new flood maps for the first time in 50 years.

As you can see rivers like falls and Verdigris rivers have caused all kinds of floods in the area through the years. A flood insurance study report was done after the 1976 flood but it was determined that maps did not need to change.

So what are the different flood zones in the Wilson county Kansas area?

You basically have three types of flood zones in the area.

So with these maps being updated who will be impacted? These map changes will impact roughly 12% of the county. It will take about 500 properties and place them in special flood hazard areas. This means they will be moved from non mandatory zones to mandatory zones.

Remember as long as a community participates in the National Flood Insurance Program then flood insurance coverage will be available.

Now let's look at a couple different options when it comes to the National Flood Insurance Program. As we mentioned before about 500 properties are being moved from non mandatory areas to mandatory areas.

These particular properties qualify for map revision also called newly mapped rates. These are special flood insurance rates that are offered for the first 12 months after the flood insurance map changed. This is almost like a year one break and after that the rate will continue to adjust until the rate meets the risk properly.

Its important when getting flood insurance quotes that you inform the insurance agent that your map recently changed. If not you could be over charged by more than $1000. This is exactly what we had happen to a client in Iowa in 2019 when their flood maps changed.

So what is private flood insurance?

There can be many benefits to private flood insurance like higher amounts of coverage and significant savings sometimes up to 40%.

So we have looked at the new flood map changes for Wilson county Kansas, the impact, the flood zones, and the flood insurance options.

Maybe you have more questions about what you can do to fight these changes? Make sure to visit our website and check out our Youtube channel where we do daily flood education videos.

You have always heard the grass is not always greener on the other side. This applies to many things in life and flood insurance is no exception.

This theory as well as the shiny toy or object syndrome can apply to flood insurance in many ways.

In this podcast we discuss those things and more.

Let's look at flood insurance and greener grass. We hear from people ever day trying to jump ship from the National Flood Insurance Program to private flood insurance. When they get there they are disappointed because they did not address a few things like

This is when that green grass can turn to brown grass. You see once you cancel or let coverage lapse on a grandfathered policy there is no getting it back. So many times we have seen customers take out a private flood insurance policy that is a few dollars less than the grandfathered rate, but at renewal it doubles because of flood claims in the area.

They try to go back to the National Flood Insurance Program but now they must accept a standard policy. This could be the difference between a $600 policy and a $2500 policy.

This is why if someone has a grandfathered policy it is rare that we recommend cancelling it. There is more to consider than the current price. You need to consider what happens after a claim, and can you transfer that private flood policy to another buyer?

Something else people don't think about is when they have a bad experience. If you wanted to change auto or home insurance you could at any time with no penalty. However private flood insurance does not work this way as there are what is called earned premium.

Most private companies this ranges from 25-50% this means if you decide to leave after a couple of months you are still out that money.

Something else is running to the other side before checking the FEMA cancellation rules. You see FEMA does not allow property owners to switch to the private market midterm. This is considered cancellation reason 26 duplicate policy outside NFIP.

The shiny toy or object syndrome can play a major role in flood insurance. Trust me I know I get tricked by shiny objects everyday. When it comes to automation in our business I am always trying something new because of some new feature. The problem is at the end of the day I am no better off. This is the exact problem many property owners have when shopping for flood insurance.

You have these companies that offer these fancy online portals for you to access your documents. The problem is the policy actually excludes more than it includes. So when it comes to getting distracted like this make sure to focus on building coverage, contents coverage, living expenses, and long term pricing stability.

So we have talked about how the grass is not always greener and how shiny toy or object syndrome could get your flood insurance in trouble. Maybe you have further questions about picking the right policy?

Make sure to visit our website or check out our daily flood education videos on our YouTube channel.

Unless you live under a rock you probably remember the terrible flooding that occurred across the United States in 2019. Alabama property owners fell victim to this flooding in early 2019.

In this episode of the podcast we want to discuss what exactly is causing the flood threat for Alabama and how it is impacting flood insurance availability?

November and December 2019 were some unusually wet months. The higher levels of rainfalls in this month helped fill up rivers, lakes, and streams across the state. Then there was January 2020 which was extremely wet.

It almost feels like the twilight zone from 2019 when Alabama suffered from significant flooding. However this flooding is a little bit different. You see in 2019 Alabama got hit with a steady week of rainfall which caused Weise lake and Lake Logan Martin to fill up flooding homes.

Video below from CBS 42 News in Birmingham Alabama shows us some of that damage.

In 2020 the story has been a little bit different, instead of a week of rainfall it has been one moisture filled system after another.

It's similar to what happened in Iowa in 2019 where moisture filled systems caused one flooding event after another.

February 6th might go down as a historical day in Alabama weather history. You had some cities in Alabama that set single day rainfall records. The National Weather Service shows us some of those records from Tuscaloosa to Huntsville Alabama. Some areas received anywhere from 3-5 inches of rain. You put this on top of already full rivers and lakes and you have a major problem.

However it doesn't end there the week of February 10th brought another 4-6 inches of rain causing even more flooding in areas like Birmingham and Huntsville Alabama.

So how exactly is this impacting flood insurance options in Alabama?

Well if you have watched our videos or read our blogs then you probably know there are two options for flood insurance in Alabama.

You have the National Flood Insurance Program also known as NFIP, as almost everybody knows about and you have private flood insurance.

Let's look at NFIP first thankfully when this type of flooding occurs it does not impact getting flood insurance through it. However the private flood insurance market is a different story. As of February 7th 2020 many of those companies have moratoriums in areas like Huntsville.

So what does this mean for you?

Well this means if you decide to get flood insurance through one of these companies they will make you wait until these moratoriums are lifted.

We just had this happen to someone who was building an apartment complex in Huntsville. They could not get the private option they wanted and had to go with the NFIP option. This had a big impact on them because the rate was higher and NFIP will not let you cancel midterm for a better option.

So what can you do then?

Well in these situations the only real options are the NFIP and the private carriers that do not have these moratoriums.

So will they allow you to back date coverage when the moratorium is lifted?

No they will only start coverage on the date the policy is completed. They may even make you wait 15 days depending on if it is for a loan closing or not.

Have questions about flood insurance in Alabama, then make sure to visit our website. You can also check out our daily flood education videos on our YouTube channel.