Clogged Drains, Interstates, and homes, what in the world do these things have in common?

Well glad you asked they are all connected by FLOODING!

Flooding has occurred in 2019 and 2020 on interstates and communities as a result of clogged drains. The flooding in these communities has started to have a major impact on property owners. We want to discuss two particular scenarios and how the flooding could have been prevented.

Then let's review how interstate flooding is occurring and the impact it is having on communities.

The first area we want to look at is Germantown Tennessee. This area suffered severe flooding in June 2019 the way water came rushing in and rushing out raised alot of questions. According to WMC 5 action News water went down so rapidly that it was like a stopper had been pulled out of a tub.

So what exactly caused the flooding in this part of Germantown?

It was a combination of heavy rainfall and drainage systems. More than 10 inches of rain was received which caused flash flooding across the area and it seems that the drainage infrastructure of the area created an even larger disaster.

Let's get one thing straight 10 inches of rain within a short amount of time could overwhelm any system. However the concern here that residents have is they have received this amount of rainfall in the past with no flash flooding issues. They had complained about drainage issues up until the week before the flooding occurred. The fact that the water left the home almost as fast as it entered the home clearly showed something failed with the drainage systems.

The problem with many drainage systems is they were built 50-60 years ago and they simply aren't built to carry that amount of water away that fast.

This is an issue that Augusta Georgia faced in 2019 when it faced drainage problems from flooding. According to WRDW.com basically the older city areas we do have where it takes time for the system to carry the water because it's an older system.So whether it was clogged drains or simply the system being overwhelmed, what is clear is the importance of keeping these drains clear and up to date.

Another stress that is put on drainage systems is when it's time for the water to leave. You have areas like Houston Texas that seem to face this issue on a regular basis. According to The Atlantic when this water hits areas like sidewalks and parking lots you no longer control where the water goes. So this water ends up where the grade takes it which normally is low lying areas creating more of an issue for drainage systems to deal with, so it can be a design problem for many areas.

As Toledo Ohio has shown us with their historic flooding from drainage issues that something has to be done.

What can be done?

Most people think that it takes 10 inches of rain like what occurred in Germantown but many of the flood issues in Toledo have come from less than 2 inches of rain within a short amount of time.

Thankfully areas like Toledo are looking at measures to reduce the impact that drainage systems can have on flooding. Some of these measures include decreasing combined sewer and stormwater overflows

Now let's look at how these clogged drains can impact the transportation infrastructure of a major city.

Flooding on interstates has become a bigger problem over the years. You had interstates completely submerged during flooding in Macon Georgia in the 90's. It was the first time where every interstate system going into a city was cutoff by water.

You have the constant drainage issues that occur in Houston after heavy rains. Then there is I-285 in Atlanta Georgia being shut down multiple times in 2020 as a result of flooding.

So whats the issue here?

Are the drainage systems or clogged drains to blame here?

Maybe and Maybe not.

In the situation with Atlanta each time the interstate has been closed it was a result of clogged drains. The city is working on resolutions to make sure this doesn't happen.

However in the situation with Macon Georgia and Houston Texas there simply was so much water that there simply wasn't anywhere for it to go. Houston has experienced this at least twice in the last 5 years with hurricane Harvey and tropical storm Imelda both ranking as some of the wettest storms in history.

So what can be done to make outcomes like this do not occur again? 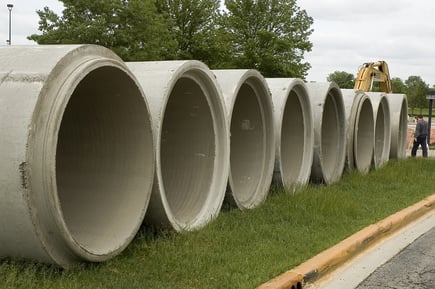 The constant development of new drainage systems in major metropolitan areas is a first step however as you can imagine these are not cheap or short processes. It takes many years of studying the data to see the impacts financially and environmentally.

So we have looked at drainage systems and clogged drains and the impacts they are having on communities and transportation. However what about your own home?

Are you responsible for the drainage issues on your property or is it a community issue?

It kind of falls on both parties to help mitigate the risk of flooding in these areas. Where you start to see an issue in many situations is when new development or construction starts to take place in your area. It is up to the local community to help hold developers responsible for the possible flooding issues they maybe creating. When it comes to the day to day drainage systems issues on your local property a few steps can go along way.

Like keeping your gutters clear of debris and leaves the same thing can be said for stormwater drains on your property. When these drains are not properly managed they can easily redirect water where it should not be going.

So maybe you have further questions about drainage issues on your property and who is responsible? Maybe you want to make sure your are properly protected with flood insurance? Then make sure to visit our website to get more information on these things. You can also check out our YouTube channel or Facebook page where we do daily flood education videos or even check out our podcast.