As the country steadily moved into the Fall season, the southeastern region of the United States was hit by a substantial amount of rainfall. This was enough to cause flooding in some states, but the one most impacted was Alabama. 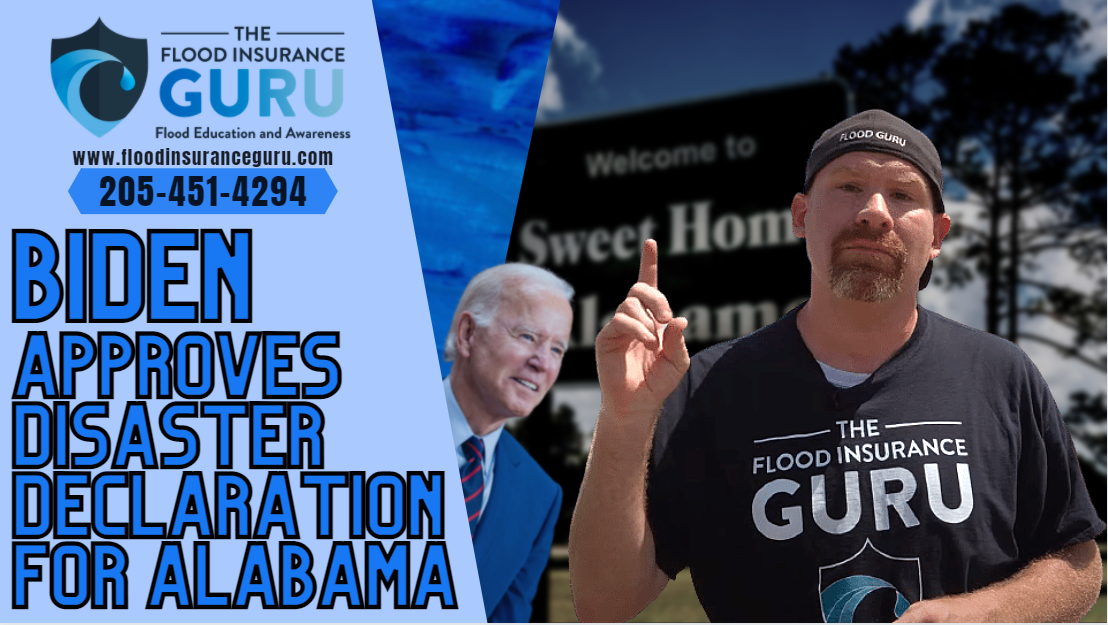 The flooding itself was so bad that fire officials said they responded to 282 calls for assistance. This is outside of the 82 rescues that had to be done in homes and about a maximum of 20 for stranded vehicles in Pelham, Alabama alone. 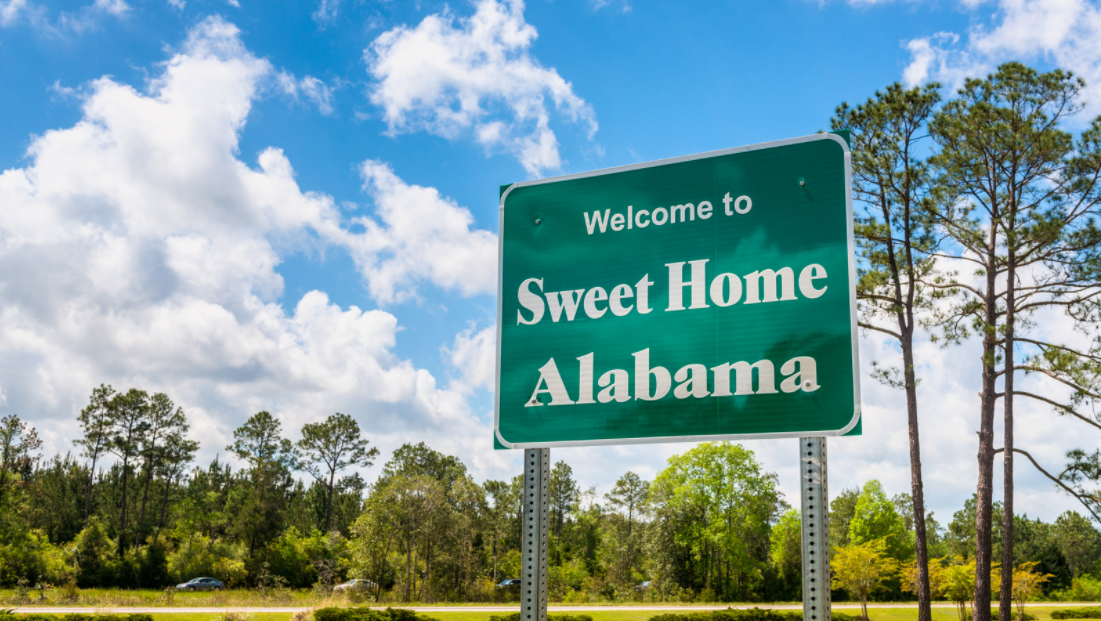 This event also caused a lot of casualties. At least four people died including children. Most of these deaths were vehicle-related meaning to say that the victims got overwhelmed with water while they are in their vehicles. These people and their respective families are in our thoughts.

When there's a flood, there's also bound to have damages on multiple infrastructure and properties.

As of December 21st, President Joseph R. Biden Jr. approves the disaster declaration for Alabama. This declaration is in order to provide federal assistance to the state's residents' wellness and recovery from the damages of the flood. The President’s action makes Federal funding available to affected individuals in the counties of Jefferson and Shelby.

According to the Federal Emergency Management Agency (FEMA), major declarations like this generally mean that provide a wide range of disaster assistance programs for individuals and public infrastructure, including funds for both emergency and permanent work. 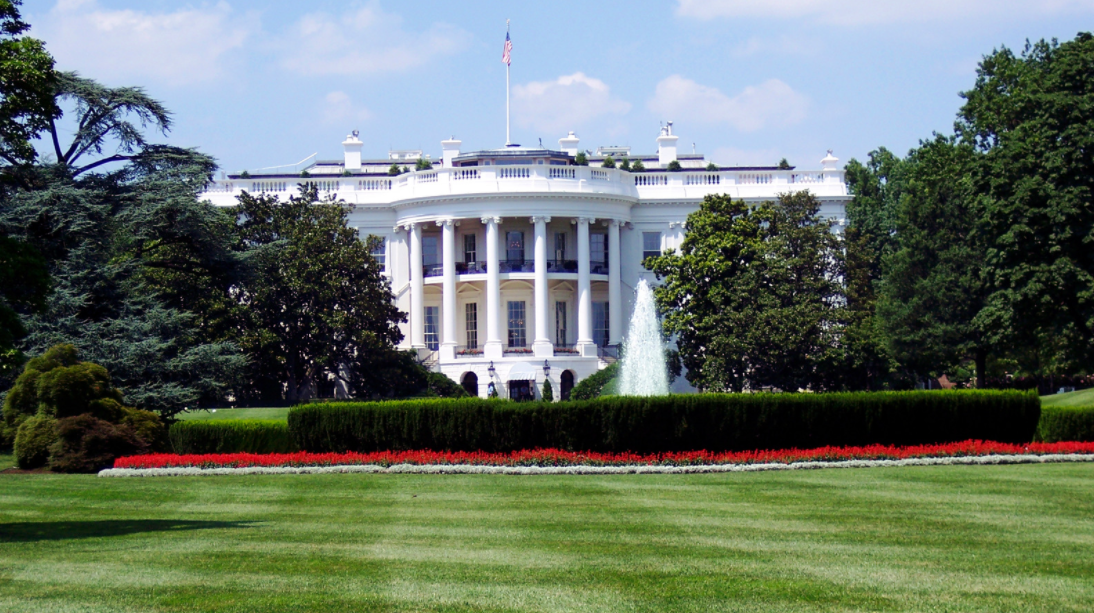 The federal assistance includes grants or financial assistance for temporary housing, low-cost loans to cover uninsured property losses, and other programs to help individuals and business owners in Alabama recover from the effects of the October flooding. Most importantly, this also includes home repairs.

Focusing on the damages of the storm on properties, we want to focus on how this assistance can help recovery efforts for both residential and commercial properties. Damage assessments will be made based on your property's cost to repair and not the cost of repair.

Cost to repair basically focuses on the actual value of your property in its before-damage condition or before it was damaged by the October flood. This also includes any necessary actions to meet the basis for hazard mitigation against floods as set by FEMA. We also call this flood mitigation which acts as the first line of protective measures to reduce the damages when floodwater starts to inundate your property.

Calculating this will be managed by the federal assistance team, but you can also do this by following the formula below: 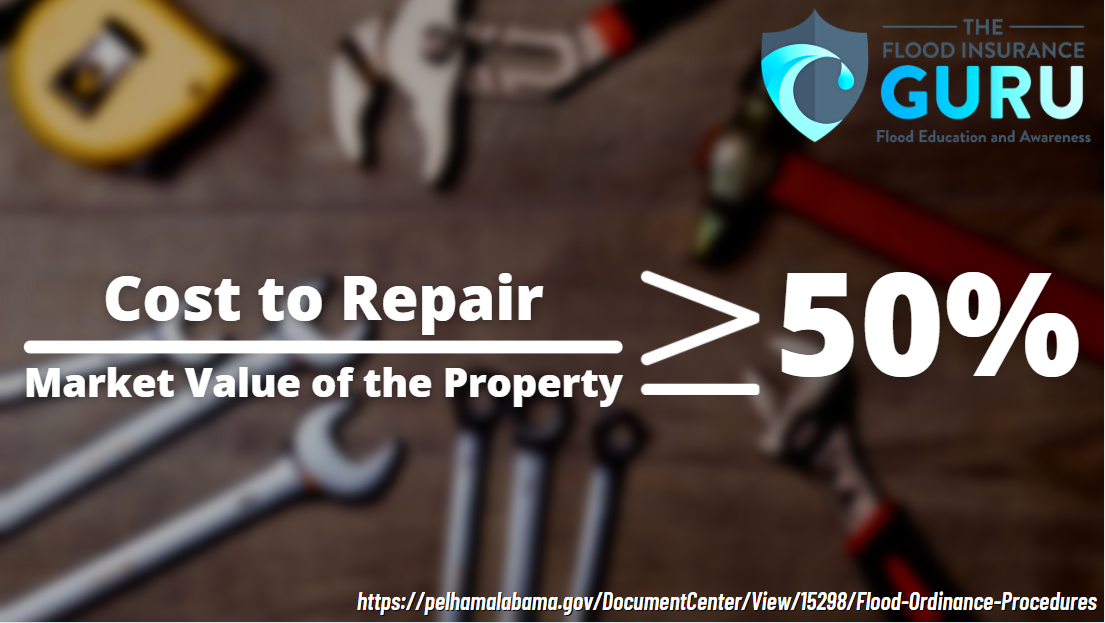 Cost of repair generally is concerned with any specific action done to repair a property. For example, getting your paint and tape redone will have cheaper costs and doesn't guarantee that it can bring back the property to its pre-damaged condition.

It's important to keep in mind this major difference between the two as you may also be involved in recovering, repairing, and rebuilding your home. Property damage as a whole will be considered and not just the specific costs to certain repairs being done to your home.

Recovering from flood damage can be very tedious especially now that Risk Rating 2.0 expects homeowners to have all of their properties meet flood mitigation efforts or else face expensive flood insurance rates from FEMA. This is for the best considering that flood loss isn't something to be taken lightly. 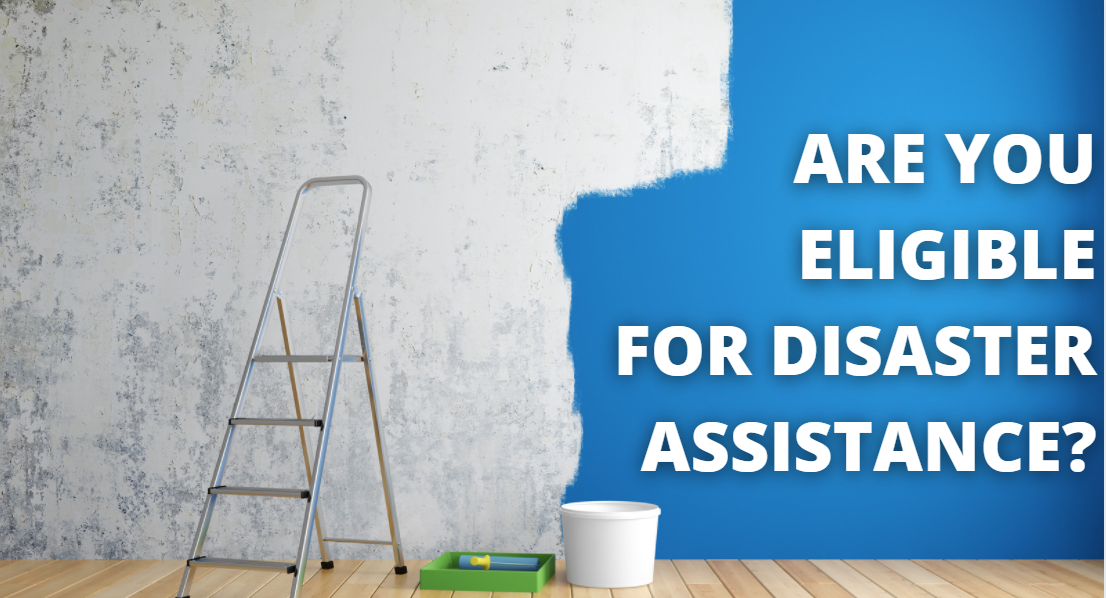 If you have questions on the cost to repair your home, if you have flood insurance and want to know how this can be helped with the new disaster declaration, or anything related to floods, click below to reach our team.

You can also go to our Flood Learning Center where we try to answer your flood insurance questions.

If you are one of the eligible homeowners in Shelby and Jefferson County, Alabama, you can begin applying for assistance by registering online at http://www.DisasterAssistance.gov or by calling 1-800-621-FEMA (3362) or 1-800-462-7585 (TTY) for the hearing and speech impaired.

Remember, we have an educational background in flood mitigation which lets us help you understand your flood risks, insurance policy, and mitigating your property long-term.

The Build Back Better Act has been going back and forth on whether or not it aims to tax the higher-earning households or not. A lot of things are coming with President Biden's expansive social and environmental bill that aims to create a better quality of life for families across the United States. This includes providing and helping American families during crisis especially after what we experienced due to COVID-19 and addressing climate change impacts to our communities. 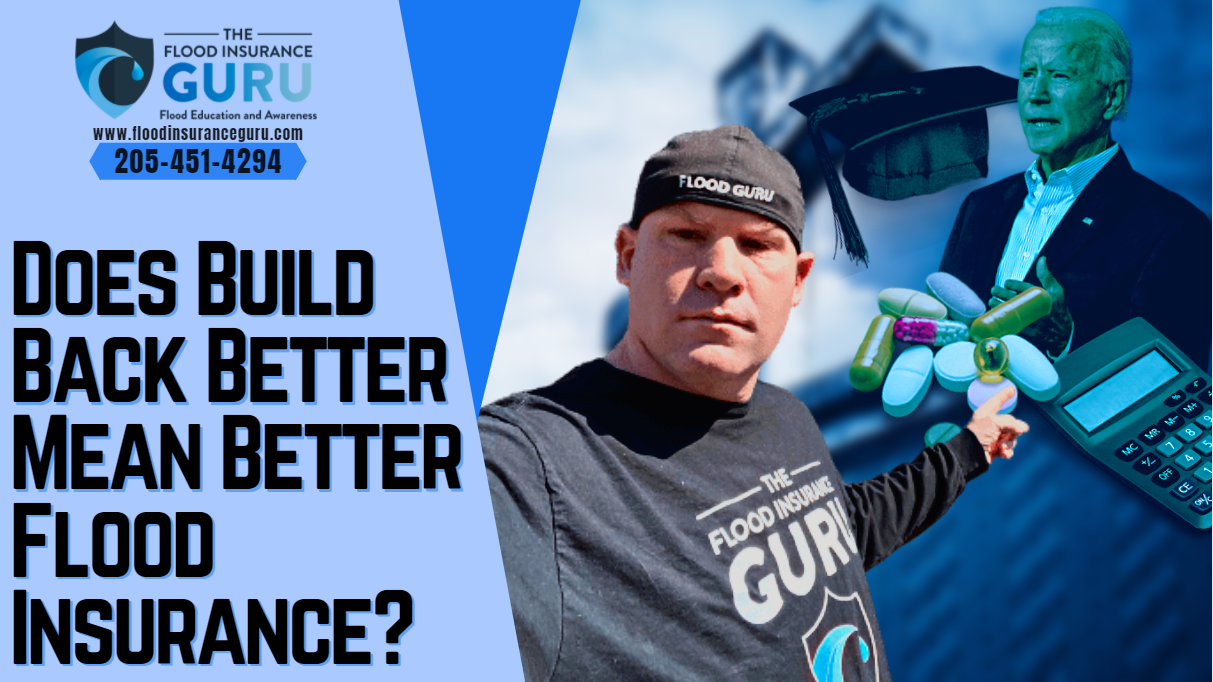 In the midst of the shape-shifting nature of political parties, the initial intent to address the risks and dangers of climate change is being scaled down. We won't dwell into the politics of it all despite it having a firm grip on how Build Back Better goes; that's a story for another day.

Will Build Back Better really build a better structure against climate change and really address the needs of our country's first line of defense against floods? Is Build Back Better just building a broken flood future for America?

What Build Back Better Includes

In the article of MSNBC on explaining the coverages of this act, they covered the following: $380 Billion will be for Child Care and Education, $555 Billion will be for Climate Change and Clean Energy Investments; this generally covers the $12,500 incentive for those looking to buy an electric car like Tesla or install solar panels. Capping prescription drugs costs at $2,000 per year for seniors as well as including Medicare coverage for hearing benefits, and $200 Billion for child tax credit extension to name a few. 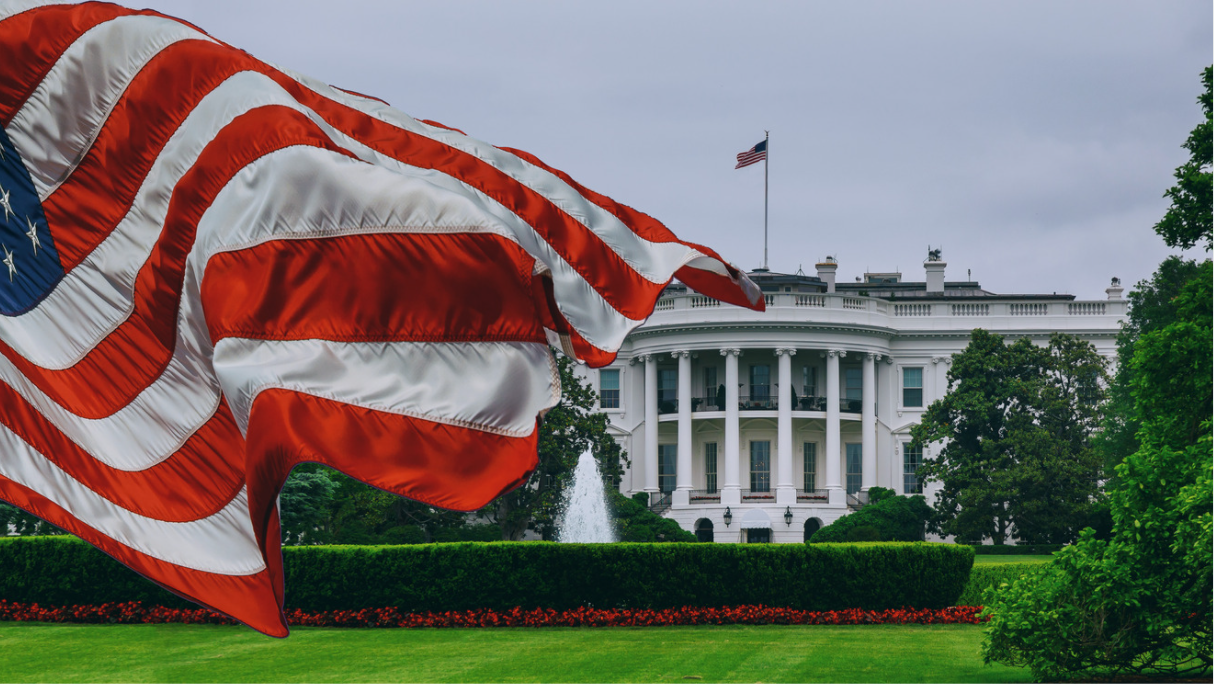 However, as the bill was passed a lot of things got changed such as taking out the dental and vision coverage, free community college, lower prescription drug costs, and the paid family leave which was something that public polls were really hoping for.

The changes also include a significant scaling down of funding for the risk mitigation for climate change which is, to be honest, what Build Back Better was for.

Does Build Back Better Include Flood Risk?

We want to focus on the significant changes on how Build Back Better addresses one of the key concerns with climate change and safeties of families across the country: the federal flood insurance.

Build Back Better was initially drafted to cover $3 Trillion to ensure that all items are ticked by dotting all the i's and crossing all the t's, but across its 12-week course, a lot of things were cut down and only about $1.75 billion was approved by the senate. Simply put, this meant that some areas' overall costs were also lowered. 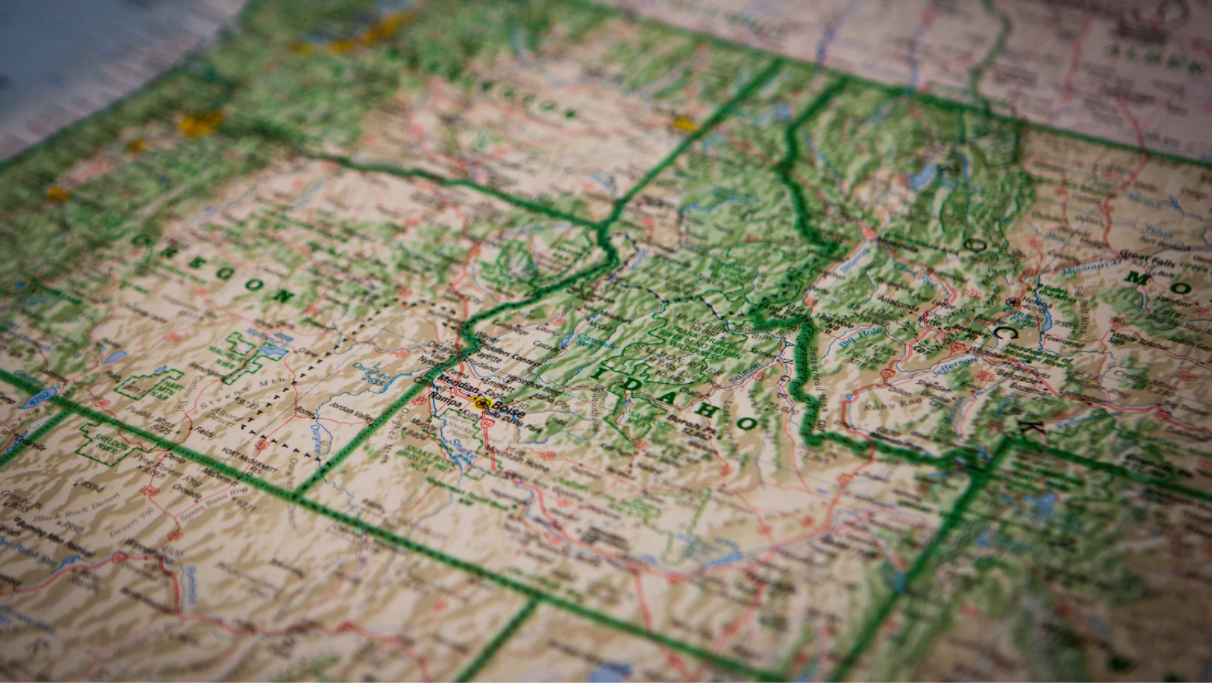 Initially, the original Build Back Better draft provided $3 Billion to improve the flood mapping hence addressing the overall understanding of the flood hazard of communities with or without an extreme event like disasters, hurricanes, and things like that. This proposed amount intends to create a system in which federal flood insurance will be able to provide you and your community with updated flood risks based on the flood mapping.

You might be thinking, this number's too big just to address flood mapping in which we would say the Association of State Floodplain Managers stated that FEMA would need between $3 billion and $12 billion to address this concern with flood mapping across the country.

This intends to prepare for the impacts of climate change especially with the frequency of flooding and its severity. With this funding, flood hazard mapping will not only address your current flood risk but also your future flood risk. This can really be helpful especially for disadvantaged communities who don't even have a flood map. In some cases, some flood maps take 15 years to get updated.

According to E&E News, the approved bill ended up cutting down the funding for this area to $600 million. That amount is just 20% of the proposed costs needed to make sure that flood mapping will be accurate and up-to-date.

It's important to keep in mind that the Federal Emergency Management Agency (FEMA) and the National Flood Insurance Program (NFIP) don't have a flood map for all and communities across the United States. The impact of cutting down the funding for this area can mean that your community will still have to wait a year or maybe even more just to get a flood map that reflects your current flood risks.

Additionally, what officials should know is that flood maps are crucial in understanding where the water is coming from. This also helps everyone understand where and how to build developments as this direct changes how floodwater behaves especially for vulnerable communities like those surrounded by rivers or the coasts.

The thing is flood hazard mapping isn't just for everyone to know their flood zones for flood insurance, but also to understand first the risk of flooding in the area.

Another area of flood insurance that Build Back Better wanted to address is allotting $1 Billion for subsidizing flood insurance premium cost within the federal flood market. This intends to allow low-and-moderate income households to be able to buy flood insurance from FEMA and the NFIP.

Generally, flood insurance with FEMA and the NFIP averages at about $1,000 per year, and with the Risk Rating 2.0 Program, this number can get more expensive for policies. It's important to keep in mind that a lot of people who aren't required to get flood insurance don't buy one because of its costs. 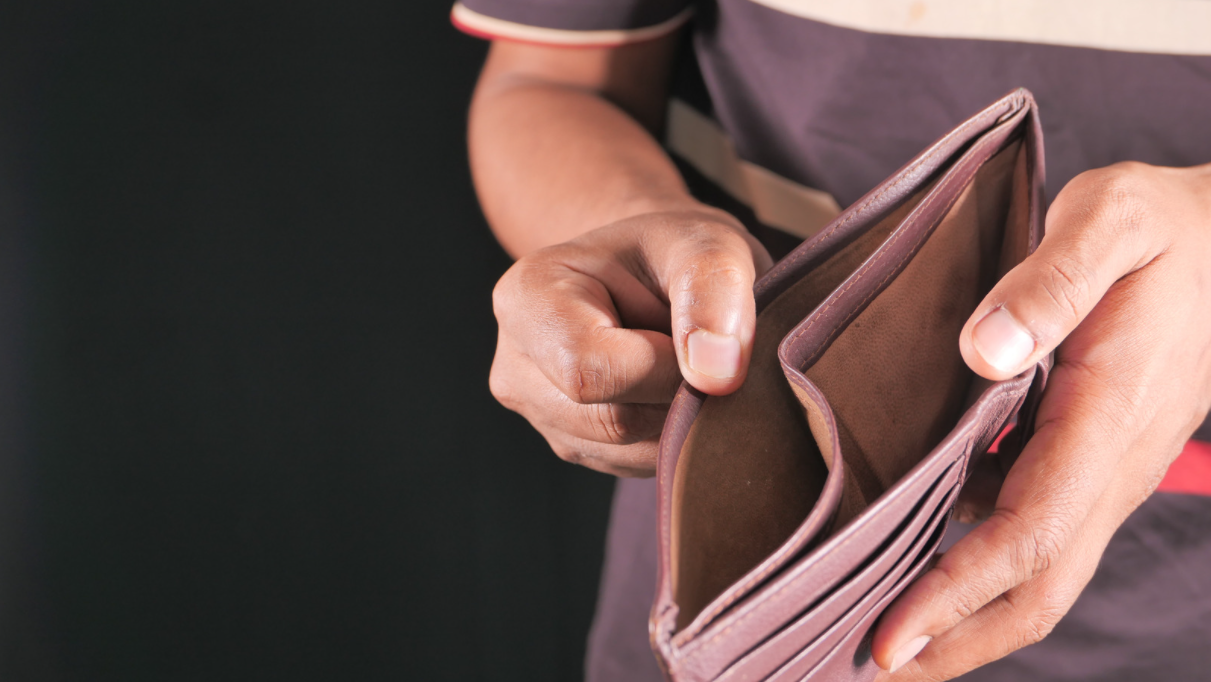 This funding helps get the program running and helps people understand that the cost of flood insurance can be cheap without the risks of not getting enough coverages. A lot of homeowners would be buying cheap flood insurance, not knowing that it won't fit their coverage needs. People do this to avoid the well-known affordability costs with FEMA and the NFIP.

However, this funding for the financial assistance when purchasing a federal flood insurance policy was also cut down to $600 million as well.

The Future of NFIP

Looking at the bright side of the fence, it's still a good thing that federal flood insurance will still be included in the conversation as we move forward with the Build Back Better act.

Despite the funding being significantly scaled-down, this additional funding for FEMA and the NFIP can address the issues within the federal side of flood insurance. However, this action of scaling down what the Federal Emergency Management Agency (FEMA) really needs makes one ask...

When will flood risk become a priority for the government? For now, only time can tell as the Senate modifies this part of Build Back Better.

You can also access our Flood Learning Center where we try to answer your common questions about floods, flood insurance, and everything in between.