The Federal Emergency Management Agency (FEMA) is rolling out changes when it comes to flood insurance rates across all states in the country. Today, we will unpack these changes coming to Rhode Island and how they can impact your flood insurance in the future.

Today, we'll talk about the home to sandy shores and seaside Colonial towns, Rhode Island. Although the state is known as the smallest state in the United States, it's important to note that there's a reason why it's called the Ocean State due to having over 400 miles of coastline.

If we look at more recent history, areas like North Kingstown received a recent flood insurance rate map (FIRM) update this year when the last update was almost a decade ago in 2010. This can really show how much work FEMA puts in making sure that each U.S. homeowner is aware of their flood risk.

Now, for most of us we might see this as a great time out on the beach however for residents this can mean a lot of flooding due to storm surge, flash floods, and those kinds of things. That said, let's cover one of your important protective measures against floods, the National Flood Insurance Program (NFIP). The NFIP is getting a lot of changes with the Risk Rating 2.0 and we want to help you understand what this could mean for flood insurance in the state.

Just like FEMA and the private sector, you also have to consider things more related to floods, or flood risk variables, when it comes to the cost of flood insurance policies. These things are as follows:

The National Flood Insurance Program will flood coverage for damages to your residential property up to $250,000 and commercial property up to $500,000. There are also coverages for the things inside the insured property or what we call contents or personal property that goes up to $100,000. In order to get a policy from FEMA, you want to consider that you're going to follow the 30-day waiting period before the policy actually takes effect on it.

The first thing we'll discuss is the good thing coming to residents of Rhode Island with the Risk Rating 2.0 changes. This will be shown as that green portion on the graph.

The green portion covers 46% or 5,520 of the policies FEMA has in force in the state. The good news is that these people will get a decrease in flood insurance rates from FEMA starting this October.

You're going to get a decrease of up to more than $100 (>$1200 per year) on FEMA flood policy rates once the Risk Rating 2.0 kicks in. This can really help a lot of people get flood insurance through the federal government and ease a little bit of that financial struggle when it comes to more expensive premiums from the NFIP.

Now, let's talk about the bad news that this new Risk Rating 2.0 will bring over to residents of the Ocean State. We'll show this as that blue portion in the graph and as you can see, it's bound to impact most of the policyholders in the state.

About 47% or 5,606 of the policies will be impacted by this bad change. This is what we generally deem as a bad change since this is going to bring you a slight increase in flood insurance rates.

The increase will range from $0 to $10 per month ($0 - $120 per year). This means that you might not even experience any change with the rates you're paying with FEMA hence the $0 or you may get up to a $10 increase per month.

Lastly, we want to talk about the last two portions left in the graph which is what we call the ugly change. We'll show this as the pink and grey range which will cover 7% and 4% of the FEMA policies in the state respectively.

Starting off with the pink portion or about 486 of the policies in Rhode Island, people here will start to get a significantly bigger increase in rates. The increase this time around will range from $10 to $20 per month ($120 - $240 per year).

On the other hand, we also have the grey portion which what we call the uglier change between the two since the increase this time around will be very drastic for those impacted. This is something that 389 of the policyholders in the state will experience. The increase will be more than $20 per month (>$240 per year). This means that you might even experience more than a $100 per month increase in your FEMA flood policy rates. 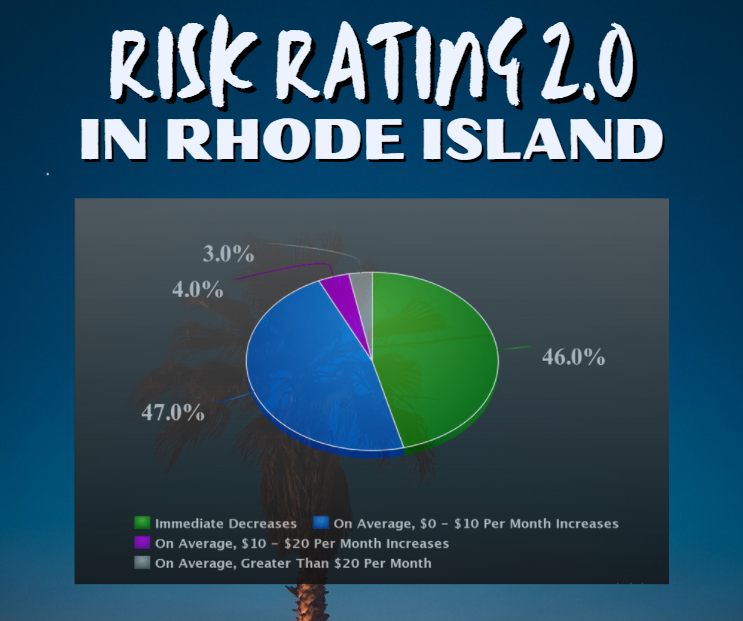 If you have questions on these upcoming changes, what are your flood insurance options in Rhode Island, or anything about flood, reach out to us through the links below. You can also watch this on our YouTube channel.