When people hear the words flood or flood insurance you would think you just got a letter from the IRS. It's one of those things that nobody wants to talk about. Its the same story for insurance agents across the country. It's the one product that many agents try to avoid because of the complexity of it, the time it takes, and the confusion of the National Flood Insurance Program.

So today we want to discuss 5 things you need to know about flood insurance as an insurance agent. Once we get through these things today we hope that you have learned something and can better serve your clients. 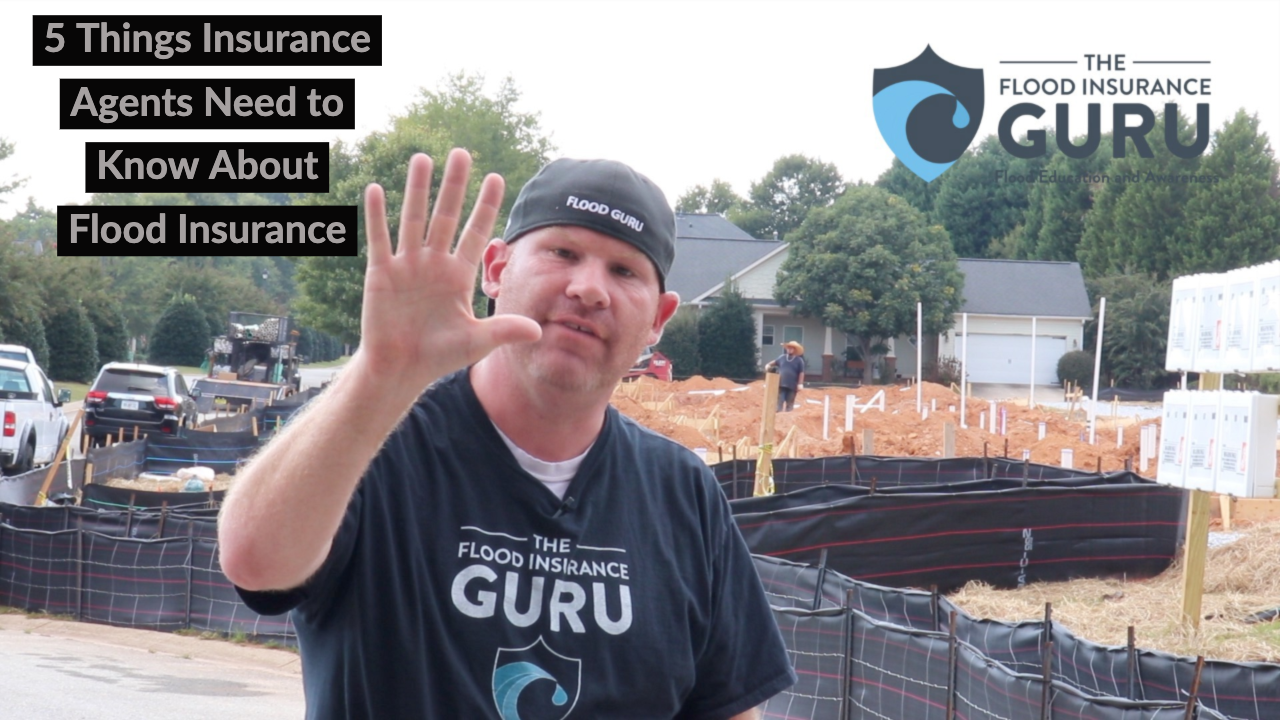 So lets look at these 5 areas of flood insurance

WRITE YOUR OWN CARRIERS AND NFIP DIRECT

So lets briefly discuss write your own carriers and NFIP Direct. If you have listened to our flood podcast, read some of our flood blogs, or seen our flood education videos then you saw where we briefly discussed the differences of these. However lets give you a brief description. The difference in these two is going directly to FEMA for your flood insurance quotes and servicing compared to going to a 3rd party. In many situations most people would try to avoid a 3rd party but in these situation the 3rd parties called write your own carriers can actually make the servicing of flood insurance much easier especially during the claims process.

As an agent its also important to know that working with the 3rd party might also keep more money in your pocket when it comes to commissions.

So now that we pretty much know the difference in these two options let's get an understanding of flood zones.

This might be one of the hardest things people have when it comes to flood insurance, even for insurance agents.

When is flood insurance required?

What does the flood zone mean?

Well let's answer those questions for you. Now there are many different types of flood zones but we want to discuss the main zones which are flood zone X, A, AE, V, and VE.

Flood zone X is going to be the minimal risk flood zone where flood insurance is not required. While it is not required roughly 30% of flooding still occurs in this zone. This particular flood zone also usually offers the best rates because it is considered low risk. Don't let the low risk designation fool you though this is what happened to so many flood victims of Houston Texas, Nebraska City Nebraska, Tulsa Oklahoma, and Florence Alabama.

This victims were told that since flood insurance was not required that it was not needed. As you can imagine they were pretty upset after losing everything in the 2019 floods.

Flood zone AE which is considered to be the special flood hazard area as well but has a base flood elevation. This means you can get a better accuracy of the true flood risk.

Flood zone V or VE are considered costal flood zones. These are areas that are usually near a coastline whether it be a lake or ocean. These properties are also considered part of the special flood hazard area which means like the other zones that flood insurance is required.

So now that we some what have an understanding of the flood zones. What if someone has a flood policy on one of these zones that no longer exists. For example the flood zone has been changed from flood zone X to A or AE. This is what is called a grandfathered policy.

This a great scenario where policy transfers come into play this is where the policy is transferred from the seller to the buyer to protect the flood insurance rate and keep the policy grandfathered. This tops the flood zone from changing on the policy as long as there has not been a gap in coverage.

Policy transfers are normally only available through the National Flood Insurance Program.

So are other flood insurance options available for your clients?

Yes generally across the United States there are two flood insurance options available.

There are some big differences in these two options and both options are not available to everyone.

The National Flood Insurance Program is available to anyone as long as that community is a participating community.

So what is a participating community?

These are communities that have agreed to meet a higher standard of flood plain management and follow strict guidelines. By doing so it makes them a participating community this also sets the community up for possible disaster assistance help after a flood.

So if a community does not participate can you still get flood insurance?

Yes there are still options available in some of these communities which brings us to the other option for flood insurance which is private flood insurance.

So what is private flood insurance?

So do your clients qualify for private flood insurance?

It could depend on two things claim history on a property and the type of loan on the property.

Many private insurance companies will not do a flood policy if a property has ever flooded. Some companies only look back 5 years and others limit it to one claim on the property.

So what does the loan type have to do with qualifying?

So what is the difference?

An admitted insurance company is backed by the state, which means:

A non-admitted insurance company isn’t approved by the state, which means:

When comparing these two options you want to pay attention to the ratings of these companies typically the better rating the better opportunity for these companies to stay in business. We normally do not recommend working with anyone that does not have an A rating.

Now there are very few admitted private flood insurance companies out there. However if you are in areas like Florida or New Jersey you have to quote first through these admitted carriers before going to the non admitted or surplus market.

It's important to understand your state guidelines on using surplus or non admitted carriers. Check out your states insurance website for guidance on this.

Private flood insurance follows similar guidelines as the National Flood Insurance Program. Now if you don't have a mortgage you can cancel at anytime but you want to pay very close attention to the minimum premium earned policy.

For example say the minimum earned premium is 50% this means you won't be getting any more than that back. So if you decide to cancel the policy 2 months in you could be out alot of money. You also want to see which fees are excluded when a policy is refunded. Normally any kind of surplus or policy fees are fully earned and not refundable.

So what if you have a mortgage? Can you cancel at anytime?

No you can only cancel this policy if your mortgage company will allow you to. Generally the private flood insurance company requires a signed cancellation letter and a letter from the bank stating it is ok to cancel the policy.

Now let's look at the National Flood Insurance Program cancellation process. This can be confusing and its why we recently do a video series on the 26 cancellation reasons. You can find the podcast that discusses those reasons here.

In 2018 FEMA released a bulletin stating that they would allow midterm cancellations for property owners to move to the private market if their bank allowed it.

However a few months later they reversed this decision. So as of 2020 the only way this policy can be cancelled for duplicate coverage is at renewal.

Here is where alot of people get in trouble when doing this they don't account for the waiting period with private flood insurance.

If its a 5 day or 15 day wait period you want to make sure that the new private policy is issued that many days before the renewal date. If you make the policy effective on the date of renewal or even one day later it could cause FEMA not to cancel the flood insurance policy for another year.

So we have discussed 5 things you should know about flood insurance as an insurance agent. Maybe you want to get a better understanding about other things on flood insurance or see how we can help your clients get their flood zone changed? Then make sure to visit our website you can also check out our daily flood education videos on our YouTube channel or Facebook page Flood Insurance Guru.