As the storms keep coming, the changes to federal flood insurance come with it as well. Today, we want to unpack the upcoming changes to Flood Insurance Rate Maps (FIRM) in the Magic City, Birmingham, Alabama. We will understand the good, the bad, and the ugly changes coming to this town and what it means for flood insurance for its locals. 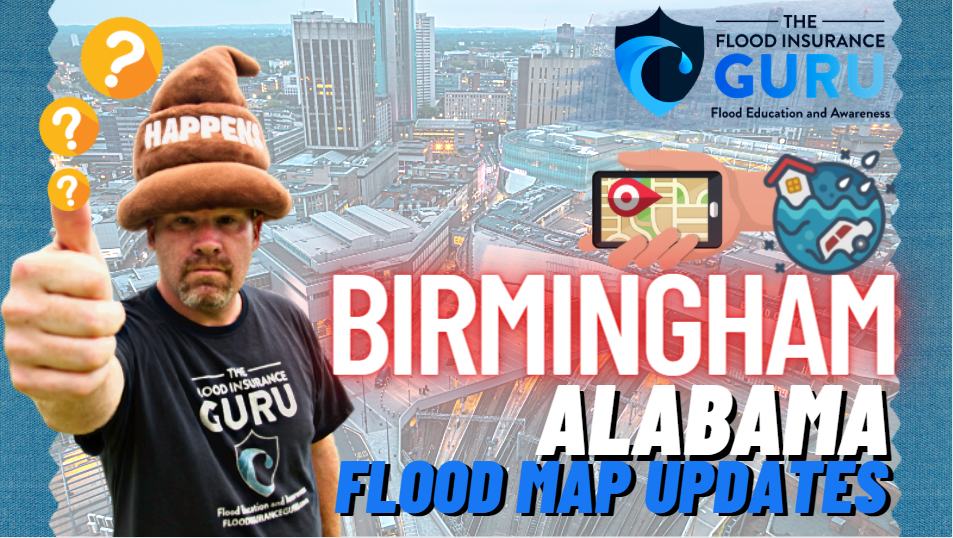 Birmingham is still the city with the biggest population when it comes to the state of Alabama. However, Birmingham Alabama is dropping numbers — alongside Montgomery Alabama — when it comes to its population which according to AL.com. Huntsville City is coming to a very close second and might even dethrone the city anytime soon. This type of development and growth can also mean that flooding can drastically change as well. We've seen earlier just this year how Birmingham, Alabama was hit with massive floods due to heavy rainfall.

Hopefully, you also realize that you really don't need to be in a flood zone to get flooded. Just this week of August 16, we saw a lot of places in Georgia, North Carolina, and Florida devastated with flash floods from continuous rain.

Today, we want to unpack the upcoming flood map changes to Birmingham Alabama, and although zone designation Flood Insurance Rate Map (FIRM) won't really impact your flood insurance rates with the Federal Emergency Management Agency (FEMA) and the National Flood Insurance Program (NFIP) in their upcoming new Risk Rating 2.0 program. It's important to always keep in mind that this will be used from a regulatory standpoint. Generally, this still means that if you're in a high-risk flood zone, also known as the special flood hazard areas (SFHA), you're still expected to carry mandatory flood insurance for your property.

So what are the upcoming changes to Birmingham City on September 24th, 2021?

To be more specific, about 2,994 property owners will have their properties move out of a high-risk flood zone and into the low-risk flood zones. This is what FEMA calls the "in to out" movement. Some would call this moving to a Flood Zone X.

Yes, this means that 2,994 property owners can choose not to purchase flood insurance for their property however, fair warning to everyone, FEMA had constantly reported that 30% of the flood insurance claims come from these low-risk flood areas.

Now, if there's good news, there's also bad news. This comes in the form of the opposite with the good movement that we're seeing which is what FEMA calls the "out to in" movement. This is generally because your property that wasn't in a high-risk zone or special flood hazard area (SFHA) will be moved into the SFHA and high-risk zones. Some would call this "moving from Flood Zone X to Flood Zone A."

Only 157 properties will be impacted by this change in FEMA Flood Maps to Birmingham. This is bad for a couple of reasons. One, since FEMA and the National Flood Insurance Program (NFIP) runs through a lot of flood data, they are seeing that your property or the general area that it's in has received an increase in current flood risk and/or possible future flood risk.

Lastly, we still have to discuss the biggest change and the ugliest among these three. The ugly change represents the "in to in" movement. This means that a property that's already in a high-risk flood zone will be mapped into a higher-risk flood zone. You can call this "moving from Flood Zone A to Flood Zone AE."

This will impact about 12,889 properties in Birmingham which is a very huge number. In fact, we rarely see an "in to in" movement that comprises the biggest chunk within these three changes. However, instead of worrying about a possible flood insurance rate increase (which will disappear by the time NFIP Risk Rating 2.0 kicks in), this simply means that when something like Tropical Storm Elsa happens again, you might face a bigger and more severe flood damage to your property.

There are ways to make these bad and ugly changes easier to manage however. This starts with your preferred flood insurance option: the National Flood Insurance Program (NFIP) or the Private Flood market. Let's talk more about these two.

There are also perks with your participating community in Birmingham. A participating community gets access to federal flood insurance and disaster assistance, but more importantly, you also get to work with your community on raising your Community Rating System (CRS) score. The CRS measures and rewards the overall flood mitigation efforts done by the community according to FEMA's standards on floodplain management. Simply put, the higher your CRS score is, the bigger the flood insurance discount you'll get from FEMA and the NFIP.

Another good thing coming out of private flood is that there are no coverage limits. This means that you won't really need to stress over how to get covered for a $500,000 home since it will be fully covered by your policy. This is the same with contents coverage and you'll also get additional coverages like replacement costs, additional living expenses, and loss of use.

If you have questions on these new FEMA flood maps, maybe you want to determine your flood zone, knowing your area's average flood depths and flood data, or anything about flood, reach out to us.