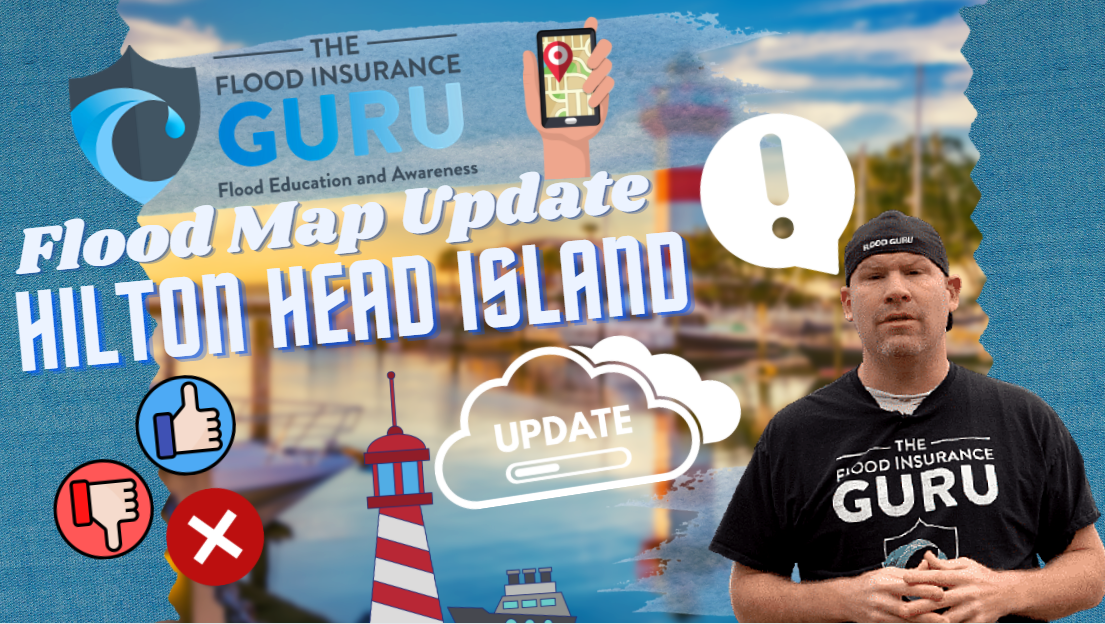 Mossy Oaks for example, despite having projects to properly mitigate everyone's property from flood damage, should still look out since this percentage (just for this month) may increase moving forward. In 2017, news were filled of its flooding due to rainfall from Hurricane Irma.

Now we've looked at the lenses of history, let's look into the good, the bad, and the ugly changes for Hilton Head Island and see how much this will affect flood insurance rates as well as your flood insurance options.

In this latest Flood Insurance Rate Map (FIRM) update, there's around 18,000 Hilton Head Island residents that were inside the Special Flood Hazard Areas (SFHA) are now being moved out to preferred flood zones or lower risk flood zones compared to the SFHA. This movement is what we call "In to Out".

There might be cases as well that certain residents are being moved from a higher flood risk zone to a lower one, like Flood Zone AE to Flood Zone A or Flood Zone V to Flood Zone AE. This also means that the further way you get from the blue area which is the color of the SFHA, you'll get a decrease in your flood insurance premium.

Considering how the Risk Rating 2.0 updates have significantly increased the NFIP flood policy premium, this movement can really be helpful for these Hilton Head residents.

Bad news for about 1,500 residents of Hilton Head though since they're moving "out to in" which means they were in preferred flood zones like Flood Zone X and now has been moved into high risk flood zones. This means that your bank and the National Flood Insurance Program will require you to get flood insurance for your property owners in these zones. You can learn more on these flood zones by checking our content below.

If your community is currently in the NFIP Participating Community then it's your best shot at reducing the higher flood insurance premiums as a Hilton Head Island resident. This is because the Community Rating System (CRS) can really be helpful in providing discounts from 5 to 40 percent for the government-backed flood insurance policies.

Participating community benefits are really helpful since you'll have access to the NFIP flood insurance policy, the government's disaster assistance and grants. You can always reach out to your elected officials over at the city hall or your flood plain management to check on your community's current standing when it comes to participating in the NFIP.

This definitely means that you're going to receive drastic increase in your premium with the National Flood Insurance Program policy. More than the threat storm surge for being moved into coastal flood zone, this is really something to look out for since these increases will really hurt your wallet.

Let's say you're in an area where there's only one annual chance flood for the every 100 years, you shouldn't be taking it easy as base-flood elevation seems to increase every year as well. This means that even if you're in a preferred zone, it's better to have flood insurance with your property regardless.

The good thing about the NFIP is that they don't choose their risks and will provide flood insurance coverage regardless whereas private flood may choose to cancel or non-renew these policies they have due to the area having too much of a high risk in flooding.

On the other hand, there's also the private flood insurance market which can provide property/building insurance of up to $10,000,000 coverage. Their content coverage of up to $500,000 plus replacement costs and additional living expenses. Additional living expenses means that whatever the costs you're going to need as your property is being renovated or repaired is going to be covered by the private insurance company. The overall processing time for purchase and claim are significantly faster as well since private flood doesn't have to go through all the red tape that the government requires before giving out flood insurance claims.

At the end of the day, any owner should be prepared even before any flooding happens. Remember, if you have any questions on flood insurance, flood insurance rates or premiums, how to check your flood zone, how to cancel your NFIP policy, or anything about flood, please feel free to reach out to us through our links below: